When is a child not a child? To Benjamin Netanyahu, it’s when the child is Palestinian 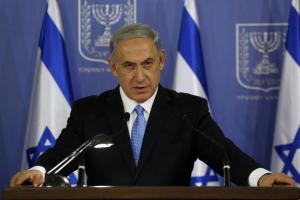 Jerusalem (AFP) – Under a photo of a glowering Benjamin Netanyahu, “Israeli Prime Minister Benjamin Netanyahu on Friday vowed harsh retribution against Hamas, the Islamist rulers of Gaza, after a mortar round fired from the Palestinian territory killed an Israeli child.

Stop and think about that for a moment. A mortar round fired from Gaza killed an Israeli child. Frightful to think about whatever the setting. No child deserves to die like that. Now turn the scene around. The glowering face belongs to the Prime Minister of Israel, who has ordered the killing of hundreds of children living in Gaza. Beyond that, he is also behind the killing of children in the occupied West Bank. Does he express any remorse when this occurs? He does not. But when an Israeli child is killed, he emits a roar of outrage, and a snarl of contempt.

In most any other setting, this point of view is condemned as blatant, malignant racism. In Western political circles, it is considered “self-defense” when Mr. Netanyahu engages in it. Where racism is concerned, the “other side” has to right to defend itself. When the face of Benjamin Netanyahu appears on stage and screen, politicians and others nod and look away.

I am not looking away. Are you? In domestic, relationships, abusive spouses view and treat their partners the way Benjamin Netanyahu and the Jewish State of Israel treats Palestinians and their children. There used to be a time in my country when people shrugged whenever an abusive husband beat up his wife and children. In most places now, physical abuse are illegal. Where Israeli politics are concerned, American, British and French politicians shrug and look the other way.

Look at it again: On one side, hundreds of children killed and wounded. On the other side, one child is killed. I think Mr. Netanyahu has just put his foot in his mouth, revealing to everyone what he stands for. I hope the politicians in Washington are watching and listening. But I’m not holding my breath.

Originally from Seattle, I now live in Sapporo, Japan, where I write, explore this city, read widely, and ask questions about things that i see as important. I'm also an author, with three novels published ("The Old Man and The Monkey", "Grandfather and The Raven", and "Bear: a story about a boy and his unusual dog"). For more information about my writing, drop by my website, at www.geogepolleyauthor.com.
View all posts by gwpj →
This entry was posted in Current Events, Gaza, Israel, Justice, Palestinian people, Peace and tagged chilren, commentary, George Polley, Israel, moral values, Opinion, Palestine, Palestinian people. Bookmark the permalink.

1 Response to When is a child not a child? To Benjamin Netanyahu, it’s when the child is Palestinian